You get these in your diet

One of my favorite topics because I’ve mentioned it on here a few times is the foods that a mum eats. When she’s breastfeeding has an impact on her baby because the foods alter the breast milk they go into the baby and they can alter the behavior of the baby in some way.

Okay, so I have been repetitively slated for suggesting this by other health professionals um such as midwives they query this and they say “no uh you know it doesn’t affect breast milk at all whatever the mom does eat what they want do what you want doesn’t matter”.

I’ve heard some pretty crazy things some advice that’s been given to mums revolved around this. However,  amazing research is totally research.

This is just backing up what I’ve been saying the researchers looked at the breast milk content of breast milk according to whether the mums ate. Oligosaccharides are sugars and they’re in particular sugars that are in foods.

Okay, so, for example, the more that went into a mum’s diet the more that was in the breast milk. This is what’s fascinating these human milk oligosaccharides are indigestible, the baby doesn’t digest them.

Okay, and there is a lot of them in breast milk. But what they do is they feed the gut bacteria in the baby and you know from this course everything we do about colic and helping the baby is trying to improve the bacteria.

You get an upset baby, we are trying to correct this now. So, they’re better now and now we’re putting it all together,  this is helping them in the future too.

So, it’s totally amazing because you can influence your baby’s gut bacteria now and their future health because of what you’re eating now. So, more research confirms that what you eat has a very quick impact on colic in your baby and their future for years. 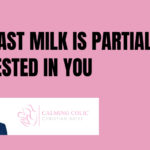 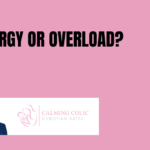