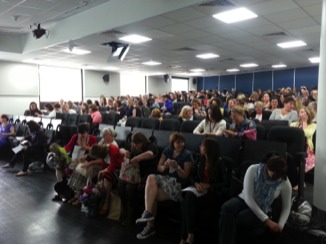 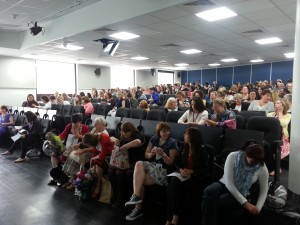 In June 2012 I was privileged and honored to speak at St Mary’s University student Midwifery Conference. My presentation was based around my book and research on infantile colic. Colic is the most common complaint in the newborn, affected up to 25% of babies and my research indicates that due to various factors this will only increase in the future. It is common and can be very distressing for the baby and parents too, not to mention the lack of sleep for everyone that it brings in the household.

As a cranial osteopath it is the most frequent complaint I treat newborns for. The more babies I treated over my 16 years the more I noticed patterns emerging in the babies first few weeks of life that tended to lead to them having colic. For example, the majority of the babies had been exposed to antibiotics either at birth, shortly after delivery or the mother had taken them and was breast feeding. It well know that antibiotics upset adults bowels, so why not in babies? The thing was I had never seen on any website a link between antibiotics and colic and certainly not a way of helping babies if this had happened to them.

This led me to started a much deeper investigation into colic in the scientific and medical research. I was delighted to find research backing up just about all my theories into infantile colic. What I was experiencing clinically was confirmed in the orthodox, medical literature. This was so important to me, I wanted my book to be able to be recommended by Doctors, health visitors and midwives because of this scientific background. Perhaps more important to me was that as a natural health practitioner I had validated my “natural” approach with orthodox referencing. Natural health practitioners are so often criticised for not having scientific studies to back up their work and I didn’t want this holding my book back from educating parents in desperate need of answers and solutions to helping their most precious of new arrivals.

I think that this is one of the main reasons I was out of the blue invited to speak at such a prestigious conference for both students and faculty. On the day I was suitable nervous but confident in my presentation and excited to present. As the day went on I actually became more nervous realising I was such an outsider to the event. All the other speakers were either student midwives or very experienced midwifery tutors. Not to mention there was only one other man in the room, a male student midwife!

I learn’t huge amounts from the other presentations. One student had done a placement into an Amish community where it was common for women to have up to 10 children with absolutely no medical intervention at all! I found it fascinating that she mentioned that the women exercised everyday in their natural lifestyle and ate well from foods grown on the village, music to my ears! Could it be anymore plain that lifestyle plays a huge role in the success of delivering a baby?

Another midwife who works closely with the well known Michel Odent spoke about how she and her team are trying to bring in better techniques of delivering babies by c-section. Making the experience as much like a natural birth for the mother and baby as possible. This was accompanied by a lovely video of them perform this “natural c-section”. This was actually the general trend throughout all the presentations; how child birth should be as wonderful for the mother and baby as possible and what could be done to improve and change current techniques for the better. The statistics used were very open and honest, for example highlighting that c-sections are now 25% of all births. I can tell you that this University and the students learning there are all working so hard to make figures such as these better and to generally look after women in labour to the highest and most caring standard possible.

The whole day was thoroughly enjoyable and I’m pleased to say I had lovely feedback from the midwives on my colic presentation and I hope that I am making awareness of cranial osteopathy and natural therapies for newborns better known within the medical community with my book Calming Colic – How to help the 10 causes of colic.

Christian Bates has been an osteopath and naturopath for 16 years, he can be consulted at the award winning Perrymount Clinic in Haywards Heath, West Sussex. His book Calming Colic is available as a paperback or for Kindle on Amazon and also at www.calmingcolic.com. Christian can be contacted on 01444 410944 or christian@theperrymount.com.

Can colic go beyond 12 weeks? Yes it can!