Bacteria from mothers gut DOES pass into breast milk

Bacteria from the gut DOES pass into her breast milk!

Massive day on the research front for Calming Colic! This study shows that gut bacteria from the mother DOES get passed into her breast milk and therefore on to her baby. This is huge! My book advises the mother to use probiotics before birth so her gut is healthy and that health is passed to her baby. I also advise probiotics whilst breast feeding for the same reason.

The scientists labelled bacteria and and found it was the same strains in the mothers gut as in the breast milk. The baby will then have huge benefits from this and of course in respect to calming colic. “We” as in natural practitioners have thought this for a long, long time and orthodox medicine would have dismissed the idea, but now we have yet again scientific proof backing up natural approaches.

It is also mentioned that this research will help produce better formulas, this is extremely important as not all mums can breast feed. Calming Colic also covers this angle, as probiotics can be put into the formula to make it that much closer to breast milk.

Scientists have discovered that important ‘good’ bacteria arrive in babies’ digestive systems from their mother’s gut via breast milk.

Although this does confirm that when it comes to early establishment of gut and immune health, ‘breast is best’, a greater understanding of how babies acquire a population of good bacteria can also help to develop formula milk that more closely mimics nature.

The study, published today (22 August) in Environmental Microbiology, which is a journal of the Society for Applied Microbiology (SfAM), was led by Professor Christophe Lacroix at the Institute for Food, Nutrition and Health, ETH-Zurich, Switzerland.

Professor Lacroix said “We are excited to find out that bacteria can actually travel from the mother’s gut to her breast milk.

“A healthy community of bacteria in the gut of both mother and baby is really important for baby’s gut health and immune system development.”

The Zurich team found the same strains of Bifidobacterium breve and several types of Clostridium bacteria, which are important for colonic health, in breast milk, and maternal and/or neonatal faeces. Strains found in breast milk may be involved in establishing a critical nutritional balance in the baby’s gut and may be important to prevent intestinal disorders.

Professor Lacroix continued “We’re not sure of the route the bacteria take from gut to breast milk but, we have used culture, isolation, sequencing and fingerprinting methods to confirm that they are definitely the same strains.”

Future research will hopefully complete the picture of how bacteria are transferred from mother to neonate. With a more thorough knowledge, we can decide which bacterial species will be most important as probiotics in formula. But until then, for neonates at least, the old adage is true, breast is best. 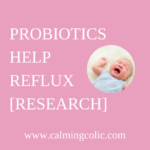