Intro: The future health of your baby

Welcome to this section on the future health of your baby now, the future health. This section kind of developed as I was helping the babies that currently had colleagues and wind and reflux. And as I was checking out the research, I realized, in fact, what was possibly more important, that as we were fixing the baby now with colic and they were a couple of weeks old, this was setting them up for future health.

And as I read more and more research, I started to see that these babies were better in the future. So fewer illnesses in the future because we fixed them when they had colic and they were just a few weeks old. It’s like this colic and how they are unhappy at the moment.

That was them saying help me now and you’ll help me in the future too. It’s their indicator colleague is an indicator that the baby is a bit unhappy now and something has triggered that, which is what this whole course is about. Antibiotics, Csection, traumatic delivery.

Who would have thought that obesity has a different type of gut bacteria in it as well? It’s pretty incredible what’s being linked. So if we can get your baby off to the best start we can within weeks or months of them being born and setting them up there, then we will be having a future impact on their health, which I think is absolutely amazing.

Also, if we’re helping the baby to breastfeed now, if we’re putting in place and the things I’m saying in this course about their head-turning and these makeup babies and frog babies and we’re unwinding them and making them happier now so they can breastfeed now, then, of course, you’re getting longer breastfeeding now, which is well researched to help into the future. So this is the introduction to the section on helping your baby in the future. 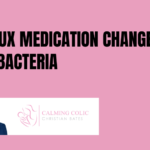 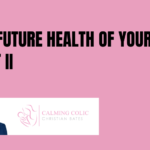