Has your baby had a hospital visit?

Some extra help for you

It’s common for babies to have had an extra stay in hospital. So, obviously, you’re going to have the baby born in a hospital. Most of you will anyway. But you may have had to go in if the baby was unwell, unfortunately for some reason.

So, they had bronchiolitis or if the delivery was quite traumatic and you both had to stay in, maybe you had to stay in a month. So, when a baby comes in and this has happened, they’ve had a hospital visit, maybe in the intensive care or something. It makes me think of getting some probiotics in again.

You’ve heard me say this many times because as you can imagine, the sort of bacterial environment in a hospital is not the best because there are quite a few ill people and things in there. So, the research shows this baby picks up the bacteria which they then take in and it gets in their gut from the birth canal, as I’ve mentioned before, that’s where it should come from.

But they will still take it on from the environment in those first days, weeks, months of life. This is why skin to skin is great. They can still pick up the bacteria from your skin and from your kisses and from being close.

So, just think about that there. They’re picking up the bacteria from you, which is going into their gut, and that’s where it stays for who knows for how long, for the rest of their life. So, also, if you’re in the hospital, they may have had antibiotics.

As we know, that’s a big knock on the gut system. I’ve even read the research that showed the babies picked up the gut bacteria depending on the Ward that they were on in the hospital. So, they looked at babies in different wards and they checked their gut bacteria and the babies had gut bacteria.

There were differences according to the wards they were on. So they picked up the gut bacteria from the wards like super amazing, really. So, if your baby has been in hospital and maybe they’ve had antibiotics or they have just been in for a while, then use the probiotics to help them with that.

If they’ve been out for a few weeks, had to go back in for a couple of nights or something, then use the probiotics again, just like if they have antibiotics, use a box of the probiotics again. Also, I find with a hospital visit is that it’s just in general, not so nice for you and the baby. So, the baby may be poked and prodded.

They may have even had to have blood taken or other tests like this which are unpleasant and that just sets in them a little bit because it’s a bit upsetting it will set in you I know. But in your head, this is how I picture it you can kind of be done without whereas a baby might take that onboard a little bit in a nervous system way. So, it can make them a bit ratty and if you’ve had this you’ll know that I’m taking what I’m saying makes sense here because they come out and they stay ratty for a few days and you want to calm them down.

So, I would use cranial sacral therapy to calm them down. But if you know some baby massage then you can do baby massage on them anything that calms it.  If they like the baths they are calming and relaxing to the system they will want cuddles obviously there’s a balance of the cuddles because we want to get them relaxed they don’t need to be cuddled all the time.

Obviously, initially, they will definitely want cuddles to get the skin-to-skin cuddles in because we know that is even better you need to be calm and relaxed because we know that passes on.  So, you can pass your stress onto your baby just by holding them. So, if you can relax deep breathing meditation, stay calm you’ll pass that on to your baby.

So, stay calm around them so you’ve got all these things to do to keep them nice, relaxed,  and then get the probiotics on board to get the gut bacteria corrected again. Then that’s the fastest way to help you’re baby if they’ve had to have an unfortunate hospital visit. 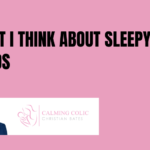 What I think of sleepy heads 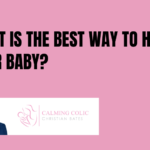 Is there a special hold to help all babies?