So in this short section.  I want to look at the day/night cycle of your baby.

Now, this might go in the myths section because it’s a myth that I hear about and it could also go in the caming section because it’s a way of calming your baby or helping your baby to calm and have a better night’s sleep.  The reason it could be in the myth section which as you know is all the things that I hear mums come in and tell me that they’ve been told we don’t make sense to me so mums get told babies don’t know the difference between day and night.

That’s why their baby’s not sleeping at night.  Okay, what doesn’t quite fit about this is that some babies do sleep at night so they do know the difference between day and night so again it’s a bit like well my baby doesn’t why is my baby screaming why my baby got colic and oh these other babies don’t.

Okay, every baby’s different so okay yes a baby doesn’t consciously in their brain know it’s daytime it’s nighttime,  oh it’s nighttime I go to bed now so I should sleep not like us not like. We know the time through the day and we know it’s bedtime but their physiology does.

Their body does know it’s night and day because it’s the Sun on our skin the plays such a big role in telling us it’s daytime it’s the Sun going down and it becoming dark that tells our body it’s nighttime there’s hormonal changes.  Cortisol wakes us up melatonin helps us go to sleep and it’s super complicated and there’s new research every day about what this light is doing to us and it’s not just about waking us up and then the Sun go down to the to make us go to sleep.

In melatonin, it does so much other think melatonin is healing okay,  so it’s a massive subject this topic of the Sun and how the Sun helps us but let’s look at babies let’s look at a few that might disrupt them.  If they’ve had a traumatic birth and they’re a bit wired and they’re a bit a bit traumatized from the delivery then they might be a bit switched on being switched on and buzzy is a bit like it being daytime all the time.

They’re not calming their bodies not recognising it’s nighttime.  They’re just going straight through as if it’s day and buzzing.  So these traumatic deliveries can have that and if you’ve watched my other videos.

You will know that automatic delivery can be forceps on to a stuck baby or a very fast delivery which also makes them buzzing.  Okay,  so if we can sort that out then they will start to recognize that they a night better physiologically also it’s an incredible link between the gut bacteria and a circadian rhythm of sleep and there’s other videos on that.

So,  we help the gut, and amazingly that helps them sleep better and recognize this cycle is all linked.  It’s absolutely amazing so my thought is that your but your baby should know that it’s day and night so when it’s daytime what you can do is get them outside.

You know get that the Sun on them.  Okay,  so I understand if it’s blazing sunshine you’re not going to stick them in the Sun so they get burned and if it’s in the UK like today it’s raining it’s miserable and it’s lunchtime it’s really dark but I think still get your baby outside fresh air some Sun is coming through.

So,  get them to know that it’s daytime then when it’s nighttime you come in then you hit into your routine of bath massage feed and be observant of how light your houses with TV lights, your mobile phones, iPads,  and tablets that is called blue light and that blue light is waking us up.

So,  imagine it’s dark outside and your baby’s starting to wind down.  These bodies recognizing that it’s nighttime the melatonin is coming up to send to sleep. Then,  you take it indoors all the lights from TV’s on you all looking at your phone the phones shining in their eyes touching their skin.

This blue light that for them is like it’s daytime. So,  you’re creating an artificial daytime with an artificial light so try and have a nice distinct difference with your baby daytime nighttime set the routine up and then see if you can get their physiology and their body just starting to recognize the proper day/night cycles. 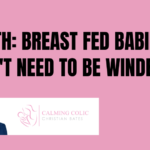 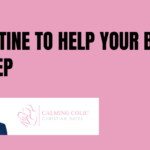 Routine to help your baby settle