It may not be genetics, but rather gut bacteria!

So I’ll talk to you a little bit about genetics, the genetics of you as a parent, and passing those to your baby. Now, we know that obviously mother and father genetics play an influence on the baby’s genetics, but what impact factors that have on them when they’re a newborn with colic and allergy or reflux or cow’s milk protein allergy or lactose intolerant or something like that.

So I find myself having this conversation with parents on a weekly basis because if there’s something wrong with the baby colic, for example, I’ve heard a number of times the mum says to me, I’m worried because I’ve got irritable bowel and now my baby’s got colic. Have I genetically passed that on to them? Or even my husband is worried because he doesn’t get on with dairy and now our babies are lactose intolerant or something like that.

So the parents are taking some blame themselves, as we all do as parents, and they’re worried that they have influenced their baby’s health because of their genetics. Okay. So yes, genetics play a role. But I think at this time when they’re in colic and they’re in reflux and they’re in newborns, the biggest influence at this moment is the delivery and the gut bacteria.

If they’ve had antibiotics and the research is there the antibiotics increase, allergy the antibiotics can trigger colic. Okay. So I think rather than genetics, it’s like gut bacteria, which is called the microbiome. So it’s like the genetics of these microbiomes. And I think at the moment if your baby is colicky and windy and a newborn, I would pay more attention to the microbiome to get their gut bacteria back and healthy and fix them now. And don’t worry so much about genetics.

Do what this course says now in this kind of immediate next few weeks, help your baby now and then, once they’re better there, then you can see maybe genetically what might have been passed on, but that microbiome, the gut bacteria has been passed on. So, for example, if you do have IBS as a mum, maybe you’re not passing on as much good gut bacteria to the baby, which then triggers some colic. So that’s passing gut bacteria on, not genetics. Okay. 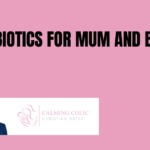 Probiotics for mum and baby 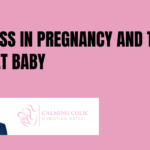