Because of bad advice!

Let me tell you an amazing story, Calming Colic birth story. And this actually was not that long ago and it is about the antibiotic baby birth type. So have a look in the baby birth type section.

And it relates to a baby pooing a lot. So an antibiotic baby birthday poo’s loads and loads of times a day. You might get one or two decent ones, but you get these watery little bits throughout the day. So mum came in, explains that to me. Exactly.

That textbook. I say, how many antibiotics have you had? She says it’s like four. The baby has had a lot of courses of antibiotics through the delivery and being back in hospital and back. And the mum had had them for mastitis and she’s had a lot.

So I said, okay, no problem. That is why your baby is pooing in like that and we can help that with the probiotics. And she looked at me a bit blank and I was like in my head thinking, OK, what’s going on?

What have I said here? She says to me, I was told the baby was allergic to my breast milk. I was like, no, I don’t think so. We’re never 100% with anything.

But I said you have described exactly an antibiotic baby birth type. You’ve had loads of antibiotics. This is something that we can really help with.

She looked at me again, a bit blank. So I wondered what was going on. So check this. She had 60 bags of expressed breast milk that she had in her freezer and she had given the whole lot away, donated it all to the hospital. So this is obviously wonderful.

She’s done so lovelily and she donated it. She didn’t have to donate any of that because it was the antibiotics. And she had been told the baby was allergic to her breast milk.

She got rid of the whole lot. So we got on that probiotics, did the treatment. Everything we do on this course baby’s better. She didn’t have to give away 60 bags of expressed breast milk.

So I was just blown away with this because this is one of those myths. This can go in the myths section because it’s one of the crazy things that mums have been told because it is not generally known or taught or you’re not told that antibiotics can upset a baby’s tummy just like they upset adults tummies, it’s commonly known.

So please do have a read of the antibiotics section. But water stored. And what’s a shame that the mum hasn’t listened to this course. 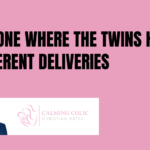 The twins with different deliveries 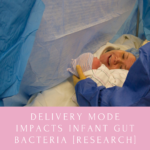