Your baby’s first poo is amazing

So, something very exciting to tell you about today and it is the baby’s first poo the meconium. Now, as a parent, you’re probably talking about poos more now than you ever have in your life.

One of the reasons that vaginal delivery is thought to be good is because they pick up bacteria. However,  my experience showed me that this didn’t all add up it’s not black and white like this.

The fluids that the baby is laying in have got bacteria in them and even food particles in them. So, you’re basically sharing everything between you and your baby doesn’t make sense really let’s tell because the babies drink in the fluid and things.

So, they looked at it, and here’s the conclusion really fab. That they could tell to a degree what babies would have colic by looking at the bacteria in the first poo amazing news because it shows that the baby does have some bacteria in it.

So, for example, if you’ve had a c-section you know that the baby has had some bacteria. It is also this is for me this is the main thing look at your bacteria as the mum, that baby is picking that up whilst they inside you before they even born.

So, you need to look after your own bacteria because that’s where the bacteria is coming from you. So, for example,  colic prevention in the last trimester you can be taking probiotics or eating foods that are good that are nourishing to your bacteria your gut bacteria or not eating loads of bad food that diminishes the bacteria.

It means that if you’ve had antibiotics in pregnancy then that might be affecting your babies’ bacteria in their first poo.  So, it takes us back before the delivery and looking after yourself having the delivery doing things.

If some examples, maybe like you had to have a c-section using the probiotic. So, we’ve now got it all staged out and planned how to help your baby all the way through hopefully prevent colicky even.

Then we know that colic has a link to future problems as well because it’s a gut bacteria change.  So, now we’re looking at future things eczema, asthma, and food allergies of your baby.

As young children, we come all the way back to when they were inside us. How you can look after yourself there with probiotics because we now know that that baby is picking up the bacteria whilst they are inside you. This is fab news because you can really get involved even more with your baby’s health while they are inside you. 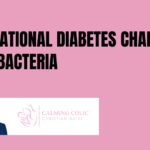 Was your baby induced