Hi, right so I really kind of have an interesting video on some of the hardest babies that I seem to help and these are refluxy, allergy babies and if you’ve got any babies, you know, they are in so much pain and they’re really crying and I wanted to bring you something that I’ve had that I’ve seen twice this week.

Mom’s saying that the probiotics aren’t working, they didn’t help, so they’ve stopped and they’ve got this allergy baby, and I’ve seen it a few times, you know the mums have said: “…well, probiotics don’t work for allergies, not worth using and things…” So there’s loads of points I want to get across.

The probiotics are not the quick fix. And when you’ve got an allergy baby you’re desperate for something to help. So these probiotics, they kind of build up. They’re gentle and that’s great. You know, when you’ve got a baby you don’t want these hard-hitting things coming in, and natural medicine is much softer and more gentle, but it takes a bit of time, but this is great with babies. You want to be gentle with the babies.

So for example, you might have stopped the probiotics because you didn’t think they “worked”, because they didn’t, but they will be doing something in the background and there’s so many of these causes that I talk about in my book that do really well with probiotics. Loads of research for probiotics. So for example, there is positive research on probiotics for colic, for allergy, for eczema, for asthma, for intolerances (you know, for reflux). It is there, but it’s not: you drop it in and it stops! You’ve got to be, you know, it takes their time, plus there’s other factors that make the jobs not work so well and I’m going to post the research in the Comments section.

C-section really needs the probiotics to build up. Antibiotics really need the probiotics to build up, but this is a really interesting, important one and it took me about five seconds to find a load of research on this. Proton pump inhibitors, which is Ranitidine – that changes the gut bacteria in the baby so, they again, need some probiotics to help them, okay, except they’re not going to suddenly make the reflux better. But, in the background you’re just keeping the good bacteria topped up whilst using the Ranitidine, for example to help the reflux which changes the gut bacteria. So I’m going to post, like, the first bit of research that came up – which is a really nice one – which is to do with antibiotics and proton pump inhibitors like they seem but it’s the same with omeprazole. A slightly different one but does the same thing – change in the stomach so they don’t have reflux.

Gaviscon, you know, that constipates the babies so, and probiotics helps you with the patient except you’re putting in these other medications that, the probiotics kind of, they can’t beat those but you’re just keeping your baby ticking along underneath the surface and it will be helping that allergy but it’s just not this “quick – fix it!” they’re after.

And it’s such a shame because I know this sort of allergy, these babies that are crying when they’re feeding they’re, you know, it’s horrible for me to see having the babies in here, but I have put, you know, a couple of moms back on their probiotics and saying: “….you know, this isn’t necessarily about fixing it right now. It’s when they grow out and they’re better and you’ve got all the good tummy bacteria….” It’s still all good underneath the reflux and all that kind of stuff.

So there’s loads of research out there on Ranitidine and things. I’m going to start posting those up as much as I can on allergy things to help your baby because they can be helped but it’s just not simple, and it’s definitely not one thing. There can be lots of little things to put in place.

Right, I hope this helps. Feel free to put comments in or message me or something. It’s really, really tricky babies that I’m trying to, you know, structure away and help you with, you know, “…. try this, try this, try this….” and then we try them all out and see if we can get there, and get some help, okay. Thank you. Bye. 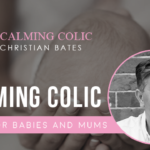 Colic and reflux. These are the SYMPTOMS, find the CAUSES to help your baby