What do I think of dummies?

I want to talk about dummies and it’s a controversial subject because parents don’t want to use a dummy and it seems that dummies are frowned upon. And perhaps this is having a child that has a dummy when they say two or three and you want to avoid that. There are some questions about dentistry.

If they’re always sucking a dummy, there’s maybe the confusion between breastfeeding and dummies. So some of the reasons that come up. But this is the interesting thing.

Out of all the things that parents use to help the dummy, I have so many times heard a parent or a mum say it’s a lifesaver. So when a parent is saying it’s a lifesaver, who would frown upon them for using it if it has helped them so much with their child? So this is my opinion on dummies.

It can be used as a tool, so you might want to temporarily use it. And I think it’s particularly good when it’s going to save your breastfeeding. So this is the baby that it’s best for and this baby actually happens to be can be a little meerkat baby, or perhaps it could be a planned C-section baby where they’re very jumpy.

So it’s a baby that wants to suck all the time and you think they want to feed all the time. So if you are feeding your baby continuously, day and night, hourly or even less, then they are sucking for comfort. So it’s a baby that sucks for comfort, but they’re sucking on you when they’re breastfeeding, or if it’s formula feeding, maybe you are feeding them that much.

So if this sort of traumatic delivery fits with them being a very sucky, fractious light sleeper, then you could be feeding them all the time. And this is why the dummy could be a lifesaver because what you can do is give them the dummy to suck on. So they’re not sucking on you, because when they’re feeding on and breastfeeding mum, they’re sucking a lot and using you as your tummy, then you could be really sore and you could be on the verge of giving up breastfeeding.

So, for example, you might give your baby a feed, and then between time, let’s say you’re feeding your baby three hourly or you should be feeding about three hourly. You then use the dummy to calm them down in between so you can get to the next three-hour feed. It’s obviously on you now, then you’re not getting so in between you get the recovery, you’re not up all the time, you can get some sleep, you can get some rest and also they’ll be hungrier 3 hours because they haven’t been feeding on you so you then might get another decent feeding and then you get a nice cycle.

So this is what I would aim to do is have the baby nice and calm so they don’t have to suffer you the whole time and then the option is there that you can start taking the dummy away and then you don’t have to be worried about having a dummy when they are two or three and then go through the whole routine then so the conclusion of this is you can use the dummy as a tool whilst you put in place all the other factors in this course to help your baby and then you get a calm baby at the end of it anyway. 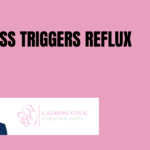 Stress in the mum triggers reflux 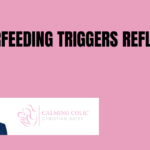